After hearing that Allen, VK3HRA was planning on heading up to Mt. Matlock and having been deprived of SOTA for a few weeks, I asked if I could come along.

The forecast was for light rain coming through during the day, so we were expecting a bit of wet weather on the summit.  I packed a small tent and wet weather gear just in case.   We met at Warburton at 8am and weather was looking good.  The drive from Warburton was on C511, the Woods Point Rd. for about 92km.  I put the coordinates of Mt. Matlock into the car navigator to see how it would go.  It gave us a turn off from C511 into Corn Hill Road for a short 1.5km or so drive to the summit, although Corn Hill Road was classed as 4WD.

About 50km from Warburton, I noticed some strange clunks from the rear of the car, so we stopped to have a look.

Don’t know why I look so happy!

We arrived at Corn Hill Road and it didn’t look too bad, so locked the wheels in 4WD and headed up.  We parked about 100m from the summit just out of the activation zone.  Just to be sure, we walked a little way down the road and turned around to head to the summit.

Allen set up on 40m with a centre fed dipole and I set up on 12m with an end fed half wave. As soon as Allen went on air, we had summit contacts with VK3DET on Mt. Lonarch and VK3FMDV on Mt. Macedon.  12m was not doing to well, I could only weakly hear Matt, VK1MA and Ian, VK3TCX.  Valid contacts were not made on 12m. 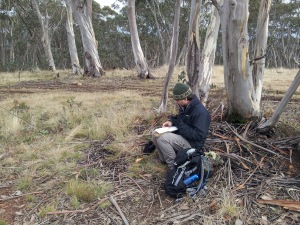 A bit later on we had summit to summits with Ian, VK1DI on Billy Range, Andrew VK1NAM and Al, VK1RX on Sentry Box Mountain and Brian, VK3MCD on Mt. Hotham.

I recently picked up a portable screwdriver style antenna while in Japan. Its a Diamond RHM8B and extends to 1.78 metres length maximum with a frequency coverage of 7MHz to 50MHz.  I gave it a try using a short piece of wire as a counterpoise (not ideal) with results as expected.  As I heard someone say recently (VK3AFW?), cute little antenna, cute little performance.  On 7MHz it was several S points down on the dipole. (polarisation will also be a factor).

All in all another great day in the hills, thanks Allen.  See Allen’s blog.

This entry was posted in SOTA. Bookmark the permalink.