While we were in Japan, my wife Sarah and daughter, Meagan were keen to hike to the summit of Mt. Fuji (3776 metres). Of course, I was interested too!  This is a lot higher than the mountains in Australia that we had previously hiked.  We chose to go on a Monday morning July 8th as this fitted into our schedule and a Monday was likely to be less congested.  It is also early in the climbing season which starts in July, so this would keep numbers down.

We were staying in Shinjuku, and we took the Keiki bus that leaves from terminal near Yodobashi Camera to Kawaguchiko 5th Station.  The earliest bus left at 7:40am, which arrived at 10:05am.  Kawaguchiko 5th Station is the second highest point where transport can go, there is slightly higher Fujinomiya 5th station, but this one was harder to get to from Tokyo.

Kawaguchiko 5th Station is at about 2200 metres altititude which means about a 1500 metre climb to the summit in altitude.  We finally left 5th station to start the hike around 10:30am.

The weather was looking good and it was probably close to 30 degrees at 5th station already.

The hike is about 7km following the Yoshida trail.  There are several stations on the way, some selling drinks, food and oxygen canisters!   At 8th station, around 3200 metres, I felt a little dizzy presumably due to oxygen levels, so we slowed down a little and soon the dizziness went away.

The track has lots of gravel to small rocks of scoria type composition, in some places there was a climb over lava rocks and this bottle necked a little as there was only room for 1 or 2 people at a time.

Looking down from 7th station

The views while ascending were fantastic, after a while you became used to the steep ground visually and this became your reference.  When you looked out at the distant views, the distant lakes and mountains seemed to be going up into the sky!  The clouds brushed by as we climbed adding to interesting scenery.

At a couple of stops we could hear a hissing sound and looked around to see people with oxygen masks.

From 8th station, the pace slowed a little with us all having to catch out breath regularly.  Still, we made the summit in 5

hours which is pretty good time. The recommended time for the ascent is between five and eight hours.

Snow drift in the background

Arriving at the top, there were some low buildings and stone walls for protection against what must be gale force winds at times.  We walked partially around the caldera at the top and had a great view into the crater.  From the track around the edge, you can walk to the edge and if you slipped, you would not be able to stop for hundreds of metres.  The temperature was just above zero.

On the edge of the caldera 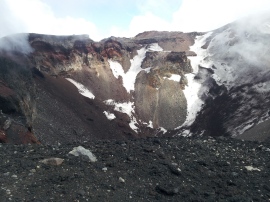 On the way down

The track down from the top takes a different path from the track up, presumably to avoid congestion in peak times.  The track down is like walking on marbles at times and we all went for the occasional slide.  Lots of fine dust is kicked up and they recommend wearing gaiters to stop it and gravel getting into  your boots.  It took us 3 hours to get down and we lost the light about 3/4 way down.  It was completely dark for the last km or so on the track.  We didn’t see too many people on the way down, they either left before us or turned back before reaching the summit. 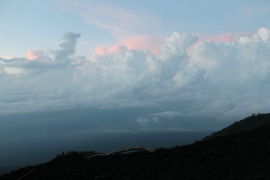 We took a slightly wrong turn on the way down and had to walk back up a bit to find the correct track back to the Subaru or Kawaguchiko 5th station.  The track back was probably a km longer.

Arriving at the 5th station we were greeted by police asking something in Japanese, but my daughter came to the rescue as interpreter and it turned out that someone had gone missing from a party that day.  Police were asking if we had seen the person.  We caught an 8:10 pm bus from 5th station down to the rail station and then another two trains to Tokyo.  We finally got back after midnight to the hotel.

We were lucky with the weather, it stayed reasonably calm the whole hike.  I would not like to do the hike with large crowds in August/September.  A highly recommended hike.

This entry was posted in Hiking. Bookmark the permalink.