Mt McLeod was on the unfinished business list after we ran out of day light a couple of years ago when it was summit 3 for the day and decided to turn back.
Kevin, VK3KAB and I decided to have another go, this time as an overnighter rather than a day trip.  We left Melbourne on Boxing day with a leisurely start of 11am and arrived at the fire trail gate on Crystal Brook Rd., off the Mt Buffalo Rd. about 4pm.   This would avoid the heat of the day.
There is very little space to park the car near the gate to the Mt. McLeod Firetrail and thankfully there were no other cars.

The walk took about 2 hrs 30 minutes to the Mt McLeod bush campground.  We had pre booked a campsite there for the princely sum of $13.60 from the Parks website.

There is a signed alternative route to Mt McLeod that avoids a partial section of the firetrail.  This route roughly follows a contour line and avoids a small climb on the firetrail, although I am not sure it was worth it.  The track was a bit overgrown and there were fallen trees in several places.  The alternative route is incorrect on the maps that we had with us, see the plot from the GPS later.

The hike has a lot of ups and downs and with the higher temperatures we had on Boxing day, going was a bit slower than normal.  The campground is just a cleared area near a creek and marshy area with a pit toilet up the hill a bit.  There was ample water supply from the creek, so we could done without carrying 5 litres or so each.  We were the only hikers there and we did not see anyone else during the two days. 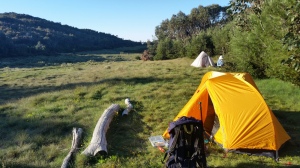 Mt McLeod from the campsite

The next morning we arose about 6am and took the radios to the summit.  As the day was predicted to be hot, we thought it best to get an early start and return to the car as early as possible.  Kevin set up a linked dipole from a squid pole on the summit, an I set up the loaded end fed on a mini squidpole tied to a tree.  I qualified on 20m and Kevin on 40m.  Conditions were fairly average.

The walk out was uneventful and took about 2 hrs 15 minutes with temperatures around 30 degrees towards the end.

I must have had my laces loose as my toes took a beating on the many downhill bits with them ending up rather bruised and painful!

After we returned to the car, we drove to The Horn and did a quick activation hand held using the KX2 and the Diamond RHMB2 loaded whip.  There where tourists everywhere so we activated just in the activation zone where the railing starts. 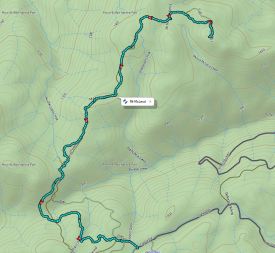 This entry was posted in Hiking, SOTA. Bookmark the permalink.