The latest built up Bitx from HF Signals looked like a bargain too good to pass up.  At only USD 59, you get a built up Bitx 40m metre transceiver with an Si5351a frequency synthesiser for tuning.

I ordered it on the 3rd of January and it arrived on the 18th January to Australia, not too bad from India.  The kit arrived well packed inside a plastic food container which kept everything safe on the way.  India post sent a tracking number but it didn’t update during transit, so it was a surprise to see it arrive unexpectedly.

At this price it hardly makes sense to do you own pcb, source components and debug!

It’s a bit larger than some of my existing 40m homebrew transceivers at 128 x 114 mm for the main board.

I would like to convert it to 20 metres as there are already several homebrew radios on 40m in the SOTA kitbox.

When time permits, a PCB lightweight case will be made for it. It will be interesting to see how it performs!

At the garden’s expense, it was wired up this afternoon and tested.  It powered up OK and receives.  The minimum discernable signal is about 0.1uV, similar to the KD1JV rig.  There is a low level clicking in the receiver at a rate of about 10 Hz, presumeably from the digital side.  The tuning method takes some getting used to.  A potentiometer is used for tuning, the mid range of the pot sort of fine tunes, and when you get to the edges, it fast tunes in 10kHz steps.  Sometimes it flips back and forward in 100Hz units.  I found that connecting the PA power ground reduced the background noise in the receiver a bit.

The receiver draws about 175mA.

The mic., PTT and PA power were wired up, but unfortunately, no RF.  It looks like there is RF in there somewhere, but it is not making it to the antenna connection.  A PTT increases the current to about 400mA and a whistle doubles that, but no RF out.  If the PA power is removed, so is the TX current.  Maybe its the relay.

Yep, it was the relay.  After removing it I found that it doesn’t switch either set of contacts despite making a slight click with 12V applied.   That would also explain the strange noise when switching from TX to RX as the receiver amp is not disconnected.  The coil measures 900 Ohms.  This one from Altronics will probably do as a replacement.

Relay fixed and it seems to be functional, although down on output power.  The case made from PCB for it below.  A top half will house the speaker.  Dimensions of the box (outside) are 173 x 122 x 47 mm.  The controls were kept as close as practically possible to keep the size of the box down.  It will be used for SOTA, so the smaller the better. 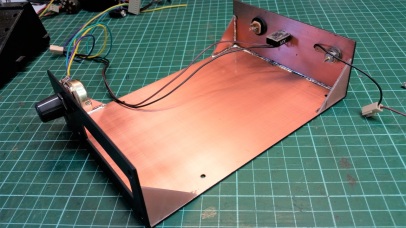 The transceiver seems very susceptible to power supply noise.  The Raduino produces quite a bit of noise that can be heard when tuning and generally when idle.  This can be removed with a series 10 Ohm resistor to the Raduino supply and a 470uF capacitor to ground on the Raduino side. 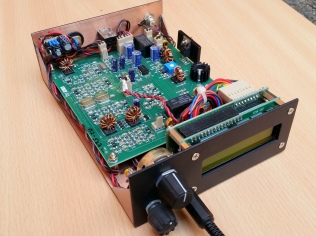 It is basically working although there are rather loud clicks between TX and RX as well as a burst of carrier on PTT.  To get around some of the susceptibility to noise on the power rails, a small filter board was added between the DC in and receiver, Raduino and PA DC power.  The board also has a 1N5408 shunt diode across the DC in case of reverse polarity. RF out is also down, something to look at when time permits.

The RF out issue turned out to be a measurement problem not a radio problem.  Its transmitting about 4.5 W @ 12V.

The PA heatsink was changed for this one from Jaycar that provided a bit more cooling plus it did not hang off the board as far as the one supplied.  It has mounting pins although the holes had to be isolated from the ground plane.

This entry was posted in Uncategorized. Bookmark the permalink.

23 Responses to BITX40 V3 and Raduino