One of the newer Victorian summits added to the register late in 2019 was Archer Lookout, VK3/VC-038.  Ron, VK3AFW was the first to activate it and after some discussions on access, I planned an activation on an ebike.

Archer Lookout is just off Monda Rd., near Narbethong.  I accessed it from Myers Creek Rd., Toolangi and took Monda Rd to a point about 3km past the Mt. St. Leonard car park, where  the road started to deteriorate for my low ground clearance AWD.  I could have probably gone further, but the track was wet and boggy in a couple of spots.

At this point, I got out the ebike, put on the pack and rode off down the road.  The ride was pretty steep in parts going over Mt. Monda.  There were a lot of fist size rough rocks on the ascent and descent of Mt. Monda that made it pretty bumpy on the bike, especially going down under braking.  Apart from that it was a nice ride ~8km each way, the bike had no problem with ascending the steep parts of the track.

After the activation on Mt. Monda, I rode north down Nursery Spur Rd., and then down Lookout Spur Rd., which looked ok for a normal AWD.  I turned back and returned to the car making a mental note to access Archer Lookout from the Narbethong direction next time via Anderson Lane, Plantation Road and then Lookout Spur Rd.  This should be straight forward and avoid the muddy rough sections on Monda Rd. 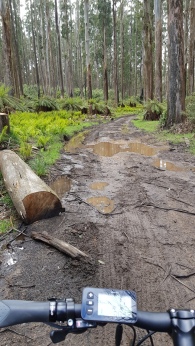 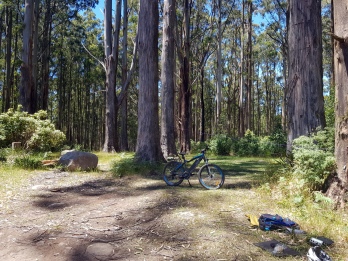 On the summit clearing

A bit later, I returned via Myers Creek Rd., and then over the Black Spur to Narbethong and took Andersons Lane, then Plantation Road  and Black Range Road to Mt. Mitchell, VK3/VN-012.  There are a lot of roads cut through this area where there are plantations.  It is pretty easy to lose your bearings if not careful, many of the tracks were new and not on my map.  Access was good AWD.

Since the inital activation in November 2019, I returned again on 2nd January and did the same ride again.

This entry was posted in radio communications, SOTA and tagged archer lookout, vk3/vc-038. Bookmark the permalink.